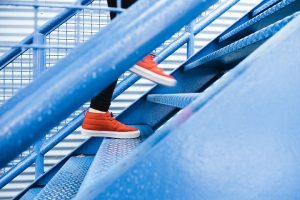 It is widely thought, as evidenced by our actions, if not our words, that success in life brings happiness. If we get that promotion, or find the perfect job, or win that award, then we’ll have arrived, then we’ll be happy. We are going to talk about success as happiness today.

As we begin today, I want to offer a more philosophically grounded story for why our conception of the good life changed so drastically. To explain, I’ll utilize the idea of “moral ecologies” as discussed by the NT Times columnist David Brooks in his book The Second Mountain [1].

Brooks begins by noting that every culture has what he calls a moral ecology. A moral ecology is a cultures system of beliefs, values, emotional response patters, social imagery, and behavioral patters that “subtly guide how you dress, how you talk, what you admire and disdain, and how you define your ultimate purpose” [2].

Prior to 1960, the culture’s moral ecology in American could be described communally in the idea that “We’re all in this together” [3]. But around 1960s with the sexual and cultural revolution, people began to think about their lives more in terms of the individual than in terms of the group. So, instead of “We’re all in this together.” The new moral ecology from 1960 on can be summarized by the phrase “I’m free to be myself” [4]. This is the rise of the individual and the idea of individual expressionism that functioned as a kind of “emancipation narrative,” according to Brooks.

While this new moral ecology, along with its focus on freedom and individuality did and does have positive consequences (Brooks notes that Silicon Valley would never have happened in the old moral ecology), there are a number of ideas that together, have led to this idea that success brings happiness. Brooks lists five [5]:

If we add all of these factors up, it is no longer difficult to see why people today think that success and achievement will bring happiness. It is the air we breathe.

Does success or achievement bring happiness?

While many pursue success as a means to happiness, a moments reflection helps us see that success is not happiness. If we aim at success, we’ll become what David Brooks calls in his book The Second Mountain an “insecure overachiever” [6] He says that our constant striving “encourages [us] to drift into a life that society loves but which [we] don’t” [7]. And he concludes, “It’s impossible to feel wholehearted” if we think that personal success will satisfy our hearts deepest longings for meaningful happiness. It may be, as we’ll see below, an ingredient of meaningful happiness, but it is not the thing that will make us happy.

How should we think about work, success, and calling?

We want to unpack three basic ideas found in James K. A. Smith’s book You are What you Love in order to think about the question of success.

Second, this commission to take up our vocations can be summarized with three verbs: image, unfold, and occupy [9].

Finally, a word about our vocation. According to Smith, we shouldn’t merely love our work, we should love it for God [15]. “It’s pursing God in our work. God provides us the vision that pulls our labor toward his kingdom” [16]. Thus, our vocation is found and that intersection of our heart’s passions, the world’s needs, and our talents. We love God by pursuing God in our work.

If we adopt these principles, we’ll move from a success mentality to a significance mentality; from a focus on striving, to a restful working. We are created to work, but our success and identity is not found in our work, it is found in Christ and we love and serve Christ through our work.

First, we find genuine happiness when we find our true end; when we succeed in the journey of life, walking by faith in hope guided by love, we succeed when our race is over and we are with God permanently and closely (cf. 2 Timothy 4:7-8). This idea of finishing the race is a kind of success where we receive the crown of righteousness and enter into God’s eternity.  Second, we find genuine happiness when we journey rightly related to others along the way. As Homo viators, creatures on the way, we are not meant to journey alone. We need each other. It is a good thing to success, to win, but it is better to be in relationship with others, win or lose. That is the greater good; that is a true picture of success.  Finally, we find success in life as an ingredient in happiness when we do our work, whatever it is that God has called us to do, and love it for God, or to put it another way, Love God in our work. This is Biblical success. So, there is a place for our work in God’s economy. And this is a metric of success too: we find success, and happiness, when we serve God and man and live out our calling to image, unfold, and occupy God’s good world as workers, or makers, of all things in creaturely response.

[6] The phrase is from the Danish novelist Matias Dalsgaard as discussed in Brooks, The Second Mountain, 24.