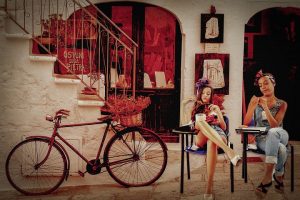 In his Cambridge Element Volume on God, Soul and the Meaning of Life, Thaddeus Metz raises a number of worries about the relation between God, the soul, and meaning. In episode 7 of season 5 of the Eudo Podcast, we’ll consider his argument that the afterlife is undesirable because it is utterly boring.

The Problem of Eternal Boredom

First, the argument from repetition. As Metz states it:

“There appear to be only a finite number of actions that one could perform in an infinite amount of time, in which case one must end up doing the same things. And doing the same things would be incompatible with the growth, progress or at least variety that many associate with a life’s being meaningful” [1].

Consider the classic image of Sisyphus rolling a rock up a hill for eternity, or the movie Groundhog Day, where the main character repeats the same day over and over again. This is hardly a picture of heaven, yet if we are immortal, it seems this is our destiny.

According to Williams, there are two conditions that must be met for the concept of immortality to be a good thing [2]:

Identity Condition (IC): the person must be the same person from one point to the next across immortal existence.

Attractiveness Condition (AC): the life of the person across immortal existence must be attractive to that individual.

What can we say against the argument from repetition or boredom? Two replies:

Second, it all depends on the nature of the afterlife [4]. William’s and Metz’s argument gets its force from a naturalistic conception of the afterlife such that life after death is very much like life before death in a godless world. Further, as James K. A. Smith notes, the idea of a boring everlasting life is “less the fruit of some considered naturalism and more the default position of a culture that’s made a god out of present pleasures” [5]. But what if life after death is richer, more vibrant, more “alive” that we could ever imagine? What if, as the Christian story describes it, the afterlife is a time of perfect happiness where the manifest presence of God is fully revealed and humans live and love and serve and explore a new creation where sin and death and destruction and decay are no more? On the Christian story, that is exactly what the afterlife will be like. And so, it is not obvious that it will be boring. In fact, Scripture seems to indicate that we can’t even image how amazing the afterlife will be—but however it turns out—it will be anything but boring! As Paul notes in 1 Cor. 2:9, “But, as it is written, ‘What no eye has seen, nor ear heard, nor the heart of man imagined, what God has prepared for those who love him.’” We can’t even imagine how amazing the afterlife will be. But we can know, because it is a place and time that God has prepared us for, that it will be amazing.

Life in the New Creation

On the static or single-activity conception, some say we’ll simply gaze at the beauty of God in permanent, joyful, direct union with God. This is known as the beatific vison tradition, a tradition that traces back to Plato (probably) as well as Aquinas, Dante, and C. S. Lewis. This is a static view of heaven, which means that in heaven we do not undergo any chance since we will be doing on thing, and one thing only—delighting in God. This is called the beatific vision, and it describes a perfect state of beatitude and joy in attaining what our hearts truly desire, which is God himself.

So, in the beatific vision the human soul grasps God in a way that is more complete and direct that any perception of God that is possible in earthly life.

For Lewis, these two great goods of heaven are connected in this way: the attainment of glory is a necessary condition for the beatific vision [7]. And we can only attain glory if we are transformed (morally) by being born again. This need for transformation underlies Jesus’s continual claim that we must lose ourselves to save ourselves.

So, for Lewis, Heaven is never boring, it is infinitely beautiful, inspiring, and interesting. Rather, it is hell is “infinitely dull: there is nothing to it” [8].

However, we think the dynamic view of the new creation is more accurate, as far as I can tell, biblically. On this view, Heaven, or the new creation, is understood as not only a place where there is the unmediated presence of God, but as a place of fellowship and communion among the saints. We’ll want to talk to Saint Paul, and then Augustine, and then Luther, and so on. But that takes time and involves change. And this suggests a more dynamic view of heaven. Moreover, the description of a New Jerusalem, and the fact that we’ll have transformed bodies suggests too that we’ll be able to engage in many of the same activities we do now (such as playing an instrument, or hiking or building or whatever).