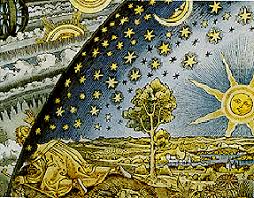 In this episode, we want to take you back in history to a time when pretty much everyone viewed the world as enchanted. This image of the world is now largely, as C. S. Lewis puts it, a “Discarded Image.” But it is an image that we think needs to be re-captured for our own day. In this episode, we’ll explore the “discarded image” as discussed mainly by C. S. Lewis in his book by that title.

Most of our discussion will be a summary of Lewis’s chapter five from The Discarded Image where he unpacks the parts of the universe, their operations, and their inhabitants.

The Parts of the Universe

Characteristics of the Medieval Model of the Universe:

Daemons – can be either good or bad, inhabit the region below the moon (p. 117).

Longaevi – (or long livers) their place or residence is ambiguous between the air and the earth.

The Earth and Her Inhabitants – Inanimate objects, plants, beasts, and man.

Are we to return to the Discarded Image, exactly as it was held by the ancients?

No, Lewis is clear that the Old Model is false. It doesn’t accurately describe the empirical data with respect to the universe. But, in discarding the old model, we have lost something important; we’ve lost the idea that the sacred and natural orders are tightly bound together. We’ve lost the idea that the natural order points beyond itself to God. We’ve lost, in short, a sacramental view of the universe and our place within it.

We now live in a world emptied of the divine, emptied of significant, meaning, purpose, value, and more. But this is not the way the world is. Rather, as Lewis put it, the world is sacred. It is holy. It is gift. It is created. How can we join with God to rediscover this sacramental image? For the rest of the season, we’ll begin to answer that question as we walk through different aspects of this world lovingly created and sustained by God.

The Procession of the Cosmos to and From God

In the Bible, we find a simple plotline, usually described in terms of Creation-Fall-Redemption-Restoration. My preferred framework for understanding the story of the Bible uses the metaphor of home and is as follows: Home-Away-Home Again. Notice the general pattern: from God to God, from creation to new creation, exitus-reditus, wander and return.

The point: for the Medievals, reality is understood as an on-going story. It begins in unity and ends in unity. All is from God and to God. We’ll see in a later episode that this has huge implications for our understanding of what it means to be human.