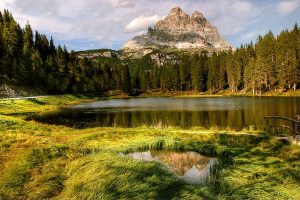 So far this season we’ve explored the question of wonder and delight. The idea is that we can join with God to reenchant the world as we learn to see the world and delight in it as Jesus does. But what is this world? How should we think of nature and the natural? Do we look first to science or theology? We don’t think you can properly understand the world without looking first to theology: nature is never just the physical. In season 4 episode 3 of the Eudo Podcast, we begin to look at the world God has made so that we can see things and delight in things the way Jesus does.

Augustine: “May I hear and understand how in the beginning you made heaven and earth (Gen. 1,1). Moses wrote this. He wrote this and went his way, passing out of this world from you to you. He is not now before me, but if he were, I would clasp him and ask him and through you beg him to explain to me creation” [1]

Katherine Sonderegger: “The doctrine of creation most broadly and traditionally treats the absolute origin of all things as from God” [2].

William Lane Craig: “Everything that exist (other than God) has been created by God” [3].

Common Convictions: (1) creation is a gift and (2) a sign of God’s work; and this leads to (3) an ethical imperative to enjoy God’s gift in creaturely response.

Where The Disagreement Lies: Creation Out of Nothing or Something?

The connection between Creation and the Trinity: According to Christian theology, God is God-in-relationship (Father-Son-HS). Irenaeus provides an illuminating metaphor. God the Father has “two hands” in mediating creation—namely, the Son and the Sprit:

“For with Him were always present the Word and Wisdom, the Son and the Spirit, by whom and in whom, freely and spontaneously, He made all things.”—Irenaeus, Against Heresies 4.20.1

Sum: Creation has a (i) starting point and (ii) a telos (the glory of God).

What are some key biblical passages that help us understand the doctrine of creation?

Has the Doctrine of Creation Out of Nothing been the consistent teaching of the Church?

The theologian Katherine Sonderegger states that “It is a great task to show how the heavens tell the glory of God, and the doctrine of creation, in this age and every age, is the church’s song of praise to that glory” [7]. In this season, we want to sing a song of praise to the glory of God as we journey together to discover the wonder and beauty of a world made by God. Our desire is that we would together learn to see and delight in the world as Jesus does. We turn, in our next episode, to considering a more ancient way of conceiving the world, a way of conceiving that is now, as C. S. Lewis describes it, a discarded image.

[4] Augustine, Confessions, 249. “In the beginning, that is from yourself, in your wisdom which is begotten of your substance, you made something and made it out of nothing. For you made heaven and earth not out of your own self, or it would be equal to your only-begotten Son and therefore to yourself. It cannot possible be right for anything which is not of you to be equal to you. Moreover, there was nothing apart from you out of which you could make them, God one in three and three in one. That is why you made heaven and earth out of nothing, a great thing and a little thing, since you, both omnipotent and good, make all things good, a great heaven and a little earth. You were, the rest was nothing.”

[5] Anselm, Monologion, 15. “[S]ince all existing things exist through the supreme essence, and nothing can exist through him unless he either makes it or is the matter for it, it follows necessarily that nothing but him exists unless he makes it. And since nothing exists or has existed except him and the things made by him, he could not make anything at all through any instrument or assistance other than himself. Now whatever he made, he certainly made it either from something as its matter or from nothing. Therefore, since it is perfectly obvious that the essence of all things that exist, other than the supreme essence, was made by that same supreme essence, and that it does not exist from any matter, there is undoubtedly nothing more evident than this: the supreme essence alone, through himself, produced so great a mass of things…from nothing.”