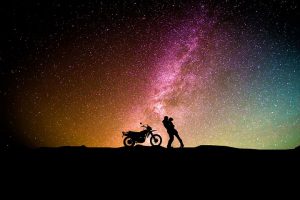 In episode 5 of season 5 of the Eudo podcast, we discuss the existential argument for God. The idea is that religious people need God in order to get on in life, and this is supposed to be a vice. Rather, we might suppose, we are to bravely live our lives as rational agents, and as rational agents, there is only one need that we ought to satisfy: the need to live our lives according to truth. If there are any other needs, those needs, it is often supposed, are irrational, or illogical, or emotional needs—and emotional needs are not the kind of thing that one should seek to meet if we are to live rightly. Since religious people use God as a crutch to meet their emotional needs, they are weak-minded, a sham, or using a crutch. But why think emotional needs unimportant? Why think that faith is merely rational? Could it be that faith is both rational and emotion, or as C. S. Lewis would have put it, a perfect blend of reason and romance, or reason and emotion? The question we want to explore in this podcast, is the relationship between faith and emotion

In a provocative book called Existential Reasons for Belief in God, the philosopher Clifford Williams argues that there is a much closer connection between faith, reason, need, emotion that we typically think [1]. In fact, he defends two claims in the book:

Second, Williams argues that the ideal way to acquire and sustain faith is through both need and reason [3]. This is an epistemic claim, and epistemic ought. I’ll begin by unpacking this second claim, and we end with an exploration of his first claim.

So, why is the ideal way to acquire and sustain faith in God through need and reason?

To begin, we need to think a bit about needs. What are they and what kinds of needs to we have. In his book, Williams distinguishes between two kinds of needs:

For Williams, there are some self-directed and other-directed needs that we have that we can plug into an argument for God. The needs Williams have in mind, are the kinds of needs that figure into our discussion for this season: needs related to our quest for meaning. So, when it comes to self-directed needs, Williams lists eight: cosmic security, belief in the afterlife, heaven, goodness, a larger life, to be loved, meaning, to be forgiven. When it comes to other-directed needs, Williams adds five more to the list: to love, awe, delighting in goodness, being present, justice and fairness.

These are the thirteen needs Williams has in mind in the existential argument for God. Now, William’s wants us to notice five things about these needs.

The Existential Argument for God

To get this argument on the table, it is important to note that there are two basic kinds of argument for theism. Traditional, evidential (epistemic) arguments hold that God exists; examples include arguments from cosmology, design, ontology, and experience. Modern existential (pragmatic) arguments hold that, regardless of whether God exists, believing in God is good for us, or is the right thing to do. Williams is offering this second kind of argument. His initial formational of the argument goes like this:

Notice the conclusion of the argument: it is not, “therefore, God exists” but rather, “therefore, faith in God is justified.” This is the key difference between evidential and existential arguments:

According to Clifford Williams, we need both kinds of arguments in order to support faith.

But as stated, the simple version of the existential argument is not quite right. We need to supplement it with reason to show its strength as an argument for faith in God.  As Williams says: “The ideal way to acquire and maintain faith is to listen to both our needs and reason. . . The existential argument for believing in God may be initially plausible, but it must be supplemented with reason for it to be finally credible” [7].

One way to strengthen the argument is as follows:

One reason why this modified existential argument is attractive, and stronger that the original, is that it highlights the uniqueness of us believing in God or placing faith in God.

Belief in God is not believing in a bare fact—say, that God exists. Rather, belief in God requires of us both reason and need and since these needs are emotions, or closely associated with emotions, and for us to realize the need we all have for God, our emotions must be functioning properly. The idea is that we will not come to believe that God exists unless we come to see, as premise 2 claims, that God is the best explanation for our needs. And we won’t see that unless our emotions are working correctly.

Williams summarizes, “people need emotions to recognize certain truths. In particular, acquiring the beliefs that God exists and cares for humans requires certain emotions… So the existential argument for believing in God [shows that] both need and reason are required to support faith” [8].

I think we are now in a position to see how using needs to acquire faith also has moral value. The answer, according to Williams is two-fold. First, doing so produces desirable emotions. And secondly a life with more desirable emotions is a better life than one with fewer or without them altogether [9].

Finally, the emotions that satisfy the needs mentioned in the existential argument for believing in God help us live a better life. Arguably, faith in God makes us happier. We are the kinds of creatures that feel things, we are emotional animals. And as it turns out, God wants to satisfy our rational and emotional needs. He wants us to find all our hope and love and longings met in him. He offers us an abundant life, and an emotionally right life, again arguably, is better than an impoverished emotional life, even if it is a purely rational life (such as Spock from Star Trek).

Williams concludes, “If then, emotions make human life so spectacular, then so do the emotions that satisfy the needs mentioned in the existential argument for believing in God. When these are cultivated, we will feel that magnificence. We will feel that life is good and wonderful” [10].