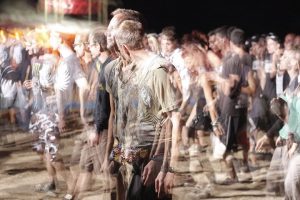 In season 4 episode 7 of the Eudo Podcast, we want to get personal—we want to consider the question of human significance. Are humans just “organized mud” or are we something more majestic, something created by God and for God? Let’s begin by exploring the question of human significance – are there any reasons to think we are special or distinct from the rest of nature?

There are at least three reasons typically offered for thinking humans are nothing special, summarized by three words: humans are late, small, and continuous.

The Argument from Lateness

What can we say in reply to this argument from lateness?

The obvious reply is that lateness and value are not correlated. In other words, there is no principle that “whatever comes last or later is less valuable than what comes first or earlier.” Moreover, it could be argued that the universe unfolding over time is just what was needed to prepare a place, like Earth for creatures like us.

The Argument from Smallness

The picture of the multiverse today starts with our own visible universe of 100 billion galaxies, each containing 100 billion stars, 13.8 billion years old… Besides that we also have the eternal multiverse containing an unlimited number of other bubble universes of comparable size… Surely, then, it is ludicrous to think that humanity… is the special creation of a divinity that presides over this vast reality [1].

Some try to find a silver lining to it all, arguing that, well, even though we are a tiny part of a vast universe, still, we are a part of it. Consider the science popularizer Neil deGrasse Tyson, who in 2014 hosted the television reboot of Sagan’s 1980 series, Cosmos. He offers this balm of comfort: “many people feel small, because they’re small and the Universe is big, but I feel big, because my atoms came from those stars” [2] While this might make some of us feel better, it does not move me. If we are just the “outcome of accidental colocations of atoms,” then, as the clear-eyed, old-line atheist Bertrand Russell puts it, all we can do is build our lives “on the firm foundation of unyielding despair” [3].

What is wrong with the argument from size?

Philosophically, the argument from size is a bad argument. It requires some premise such that “bigger is better” or “value is proportional to size.” But that is absurd. A moment’s reflection helps us see that that line of argument is pure folly. Value is not proportional to size. As C. S. Lewis argues in his book Miracles:

Theologically, it is important to remember that God’s Son came to this little speck of a planet and took on a human nature. This reveals that humans—while small relative to the entire universe—are valuable. In fact, we are the only beings created in the image of God.

The Argument from Continuity

Since Darwin’s On the Origin of Species, evolutionary theory has powerfully shaped our understanding of human significance. On the older view of nature and the natural, there is a Great Chain of Being connecting Earth to Heaven. Man is the pinnacle of God’s creation, a being endowed with great dignity and value. Man is like God, created in the divine image. As a divine image bearer, man is literally priceless. Humans are unique kinds of beings. The aim and goal of God’s good creation was beings like us endowed with an intellect and a will.

Darwinism called into question man’s uniqueness and significance. While acknowledging the higher powers found in man, Darwin thinks human distinctiveness is a difference in degree, not kind. The idea is that humans are not unique or significant. The universe, or natural selection, or whatever materialistic processes are responsible for producing humans, have not bestowed any special significance on humans. It’s up to us to find our way in the universe now that evolution, through chance or some combination of chance and necessity, has produced minds.

In response to the argument from continuity – Are humans only quantitatively different, but not different in kind from other animals?

Others see a tighter connection between human uniqueness and human significance. We have an intuition that we do matter, that our lives mean something. At least this is my intuition and I invite you to examine your own intuition. We have this sense that we are beings of great value. Yes, trees, ants, and works of art are of great value. But it does seem that, relative to other living beings and artefacts on Earth, we are of supreme value. We are the kind of being that shouldn’t be bought and sold. We are literally priceless. Man alone creates art. Man alone is free; a self-determiner of his action, character, and life story. Man alone loves and relates. Man alone communicates with a language and humor infinitely more complex than any animal. Human uniqueness suggests human significance. Human uniqueness cries out for explanation.

What does it mean to say Humans are created “in God’s image?”

There are four basic views on how the imago dei ought to be understood (though they are not mutually exclusive) [5]:

Recall that for the medieval reality is understood as an ongoing story of exit and return, exitus and reditus. Thus, in Genesis 1:1 we begin with God (and only God). Then God speaks for the entire created realm. As the theologian James Arcadi notes, “with each day [God is] adding greater diversity and multiplicity arising out of God’s unity” [6]. So we see the creator God delimiting and defining, setting boundaries and providing, and then as the culmination of this creative activity, on Day 6, God creates humans in the divine image, giving them the duties of ruling, subduing, and importantly naming “every living creature.” But what kinds of duties are these?

Arcadi argues that naming is a priestly function: “naming is an instance of differentiating . . . [and] differentiating and designating are centrally priestly jobs” [7]. When we name things, we not only differentiate, but we reveal a things essence. Thus, according to Arcadi, the priestly-function role is the most fundamental meaning of being created in God’s image. And of course, this is why we rule, and this is why we have certain structural abilities for morality, knowledge, and creativity.

If we put this all together, we now can understand the place of humans in a world created by God. As Arcadi puts it, humans are the “hinge of the universe.” All things are from God—that is the exitus part—and all things will one day be re-gifted back to God—that is the reditus part. But in between the exitus and the reditus is us—humans, the hinge—who function as priests—receiving as gift God’s good and perfect creation and preparing it to be re-gifted back to God.

So, there is, after all, a sense in which we are the “center” of the universe. Not a literally center as in the discarded image where the earth is the center of it all, but rather, according to Arcadi, as the “center of the exitus et reditus circuit” [8]. Humans “stand at the center of the cosmos in order to unify it in their act of blessing God” [9].

So, when we work and play, worship and love, we might ask ourselves, our we engaged in hinge-worthy activities that bless, name, and unify the world and those around us as we prepare to offer all things back to God in creaturely and priestly thanksgiving. For the rest of our season we’ll be looking at different facets of human life and how all of life is sacred because God exists and is present and active in our lives and in the world.