0
The Morals of the Story, by David Baggett and Marybeth Baggett
14 November 2019
November 14, 2019 by siteadmin in Book Reviews 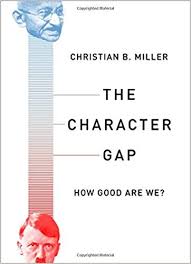 As part of Oxford’s Philosophy in Action Series, Christian Miller’s Character Gap argues that we aren’t as good (or bad) as we think we are. As a Professor of Philosophy at Wake Forest University and the director of the Character Project, Miller applies the empirical evidence from psychology to age-old questions about virtue, vice, and character formation. Reading this book deflates any balloons I might have had about my own character. We aren’t as helpful and honest as we might think. This is sobering. Yet, there is hope: we can become better, especially with God’s help. The book is organized around three questions: Why be good? (Part 1), How good (or bad) are we (Part 2)? How can be bridge the gap between how we are and how we ought to be (Part 3)?

Why be good? Why care about virtue and vice? Miller offers four reasons why we should care about becoming better people. The first reason is that virtuous people inspire us. We see a virtuous action or a virtuous life and we aspire to be like that person in that way. Second, virtuous people tend to make the world a better place. Third, God wants us to become good. Finally, being good can be rewarding: being a person of integrity leads to peace, being loving and compassionate can lead to joy and contentment, and so on. Why be good? Because it is intrinsically valuable (in itself) and because it produces further valuable states of affairs (in ourselves, in others, and in the world).

Virtues—as stable features of our character—are hard to acquire and difficult to detect, since behavior and motivation are relevant. The best evidence for virtue (or vice) are patterns of behavior over time. In Part 2, Miller explores the empirical evidence from psychology with respect to helping, harming, lying and cheating. The results are, as I’ve mentioned, sobering. We are not as helpful as we might think. We lie more, cheat more, and harm more than we realize. Things are not as bad as they could be, however. Miller concludes that most of us are neither virtuous nor vicious. We are in the middle, morally speaking, a blend of good and bad traits.

In Part 3, Miller explores strategies for bridging the gap between our actual character and the ideal. How can we become better? Three less promising strategies are (i) to do nothing, (ii) virtue labeling (attaching labels to people in the hope they will aspire to “fit” the label over time), and (iii) nudging toward virtue (providing subtle “nudges” or aspects within a “choice architecture” (p. 182) that influences behavior in the right direction). While these strategies have good features, they do not show much promise (empirically) for cultivating virtuous characters.

There are four more promising strategies, however. The first promising strategy is to have moral role models. A role model is someone we come to admire as worthy of our admiration along some dimension of character. We seek to emulate our role model and in this way, we too can become virtuous. The second promising strategy is the idea of intentionally selecting situations conducive to flourishing. In other words, we should commit to seeking out situations that are conducive to virtue (serving the poor, tutoring, weekly worship, etc.) and avoiding situations that are fraught with temptation and folly (bar hopping, cheating on taxes, etc.). While this strategy is obviously helpful, it is limited in that we are not always able to make an informed prior commitment to enter into favorable situations (and avoid those that lead to folly). A third promising situation is what Miller calls “getting the word out.” The idea is this. When we learn about, for example, the “bystander effect,” we learn that we are prone to inaction when those around us are too. In learning this tendency, and the deeper desire to avoid embarrassment, we develop tools to act correctly—by overcoming our fear of embarrassment in this example—in emergencies. In this way, we learn our natural tendencies and develop the ability to overcome those that lead to folly and a vicious character.

The fourth way for improving character, discussed in the book’s final chapter, is to seek divine assistance. Since most people in the world are religious, it is worthwhile to explore the resources found within religious traditions for character development. Miller focuses on Christianity, a religion with a rich history of thought on virtue, vice, and character formation. Moreover, within the Christian tradition, we find a moral exemplar par excellence, Jesus Christ, who Christian’s believe to be fully divine and fully human. How can we grow toward moral perfection? How can we become like Christ? Miller offers three distinctly Christian strategies for character formation. First, we can grow in character by cultivating Christian disciplines. Engaging daily in prayer, study, confession, service, solitude, and more help us to embody the gospel and become virtuous. These daily embodied expressions of the gospel shape us and seep into our bones, forming our character. Second, Miller highlights the importance of community for character development. We are social creatures, created by God, on the Christian story, to exist in community with God and others. Being in community with others provides encouragement, role models, comfort, and accountability. Finally, and most importantly, God himself is at work in our character development. One idea, developed by the philosopher William Alston, is that “sanctification involves being drawn into the divine life and participating in it to some limited extent” (P. 247). Character formation, on the Christian story, is a “joint activity” where God and man work together, in some way, to shape human character.

I found my heart sinking as I read Part 2— the section on empirical studies—and realized that I’m not as virtuous as I had hoped. If we only had secular strategies for character formation, I believe that the prospect for most of us regarding virtue would be rather bleak. Thankfully, we do not only have a moral example in Christ, but we also have one who has stooped down to become like us, so that we might become like him. This is the real nugget—percolating under the surface of Miller’s book—that gives me hope.–Reviewed by Paul M. Gould