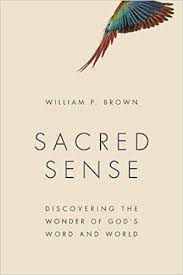 In a disenchanted age man no longer perceives reality in its proper light. As a result, our experience of the world is diminished. We fail to see the wonder of the world and as a result, we fail to encounter the God of wonder. In his book, Sacred Sense, the Old Testament scholar William P. Brown wants to awaken us from our slumber by reminding us that “God is encountered in wonder” (p. 2). Wonder is a distinctly human emotion. It is the emotional response to the perception of something novel or unexpected; it is a “potent mix of curiosity and perplexity” (p. 5). Wonder awakens our desire to know and thus has a kind of “luring quality” (p. 6), yet it also unmasks us for in “being touched by otherness” we become vulnerable to the source of wonder. Thus, wonder is a kind of “inquisitive awe” (p. 9) that leads us, if faithfully followed, into an encounter with the living God. Without wonder, our faith in God and experience of this world (and each other) remains “stuck and stagnant” (p. 3). Thus, Brown’s Sacred Sense, written to help us “read Scripture with an eye for wonder” (p. 11), offers the possibility of reenchantment.

The first three chapters explore the topic of wonder in the book of Genesis, beginning with the cosmic wonder found in Genesis 1. In fashioning a universe out of the formless void (as described in Gen 1:2), the God of Genesis 1 constructs a “cosmic edifice of hope” (p. 17). In days 1-3 we find God establishing cosmic domains for light (1:3-5), the sky and water (1:6-8), and fertile land (1:9-13). In days 4-6 we find God inhabiting the habitat: in day four God populates the celestial sphere will astral bodies (1:14-19), in day five God fills the sky above the earth with birds and the sea with marine life (1:20-23), and in day six God fills the land with beasts and humans (1:24-31). Everything God has made is good (pronounced seven times in Genesis 1). Day 7 is the only day declared “holy” by God (2:1), conveying the idea of wholeness and rest—all is as it should be, all is as God intended. The poetic narrative structure to Genesis 1, according to Brown, provides the key to unlocking its meaning: “the cosmos is cast in the image of the temple” (p. 23)! Thus, “the central message of Genesis is that all creation . . . has a place in God’s holy temple, and Sabbath is creation’s capstone” (p. 24). Among all creatures, humans are unique, created in the divine image (Gen. 1:26-28). Humans are to exercise a kingly and priestly role as God’s steward and vice-regents of creation. Much of Genesis 1 should inspire wonder: Why create at all? (Genesis is silent on this question). Why create beings that reflect the divine image? Why create collaborative agents (the earth collaborates with God in producing vegetation (1:11-12), the waters collaborate with God in producing marine life (1:20-21), and humans collaborate with God in stewarding the earth (1:26-28))? These wonderments bring special force to Barth’s insight that the “greatest mystery may not be that there is a God but that there is a world” (p. 29).

This wonder continues into Genesis 2 and 3. Why did God prohibit the first humans from eating from the tree of wisdom? What was the real test? Not eating or avoiding responsibility when they did? And what of the other tree, the Tree of Life? Did the first humans eat of that tree? Would they have had eternal life if they did? In Genesis 2 and 3, we find a God at work, bringing “groundlings” from the ground (2:7), giving humans life, work (2:15), each other (2:18) and himself. Even after Adam and Eve’s fall, God does not abandon us—he expels Adam and Eve from the Garden and provides and protects them (clothing them, preparing them for life outside the Garden (3:23-23)). This wonder takes on a new level when we consider the Flood story in Genesis 6-9. God sees that humans are evil in their hearts (6:11) and in his grief, he determines to wipe them all out, except for Noah and Noah’s family (6:13). But then, after the flood, God looks and still sees evil within the human heart (8:21). But, in an act of merciful concession, God covenants to never destroy again the earth (8:21-22). God’s self-restriction is sealed with a sign, the rainbow, itself a wonder to behold (8:13). Theologically, the rainbow is a sign of God’s cosmic covenant to work with fallen creatures to accomplish his purposes.

In chapters 4-10, Brown takes the reader on a wonder-filled tour of Old Testament texts that reveal a God of joy, delight, fear, play, and mystery. In Exodus 19-20 (chapter 4), the “visible voice” (p. 48) of God speaks to God’s people, filling them with terror and wonder as the covenant community is forged in the fire and in the law. In Proverbs 8:22-31 (chapter 5), we read of Wisdom personified, “God’s cosmic child” who “encounters the world in gleeful delight” (p. 60). As we live in “Wisdom’s world” and walk her path, we find righteousness, justice, and ultimately, joy. The great creation Psalm 104 (chapter 6) helps us see the fittingness of all within the cosmic order. The “birds build their nests” in the cedars of Lebanon and the “stork has its home in the fir trees” (Ps. 104:16-17). Everything—the beetle, the bird, the Behemoth, the human—has its “appointed place” (Ps. 104:8-9) in God’s creation. In the book of Job, we learn of the journey from wound to wonder (chapter 7). After horrendous suffering and pitiful “advice” from friends and foe, God finally speaks (Job 38-42). Out of a fierce whirlwind (Job 38:1) Job’s terror, as a medium of revelation, eventually grows into wonder (42:2-6) and restoration. God is the creator and loving sustainer of a wild and brutally beautiful world. God cares for the animals and, as Job realizes, individuals too: “Having encountered firsthand the God of the wild, Job is freed from the prison house of moralism and convention . . . . an outsider who returns to be an insider transformed and ready to transform” (p. 77). The Qoheleth, or teacher, of Ecclesiastes (chapter 8) helps us see the “ecstasy of simplicity” (p. 89). There is wonder—and joy—in the mundane. Food, drink, and toil are a divine gift. We are to enjoy them in creaturely response as we take our place in God’s unfolding story. “While Qoheleth commends following one’s desire (Eccles. 11:9),” we learn in chapter 9 that “the Song of Song aims to arouse desire, specifically erotic desire” (p. 90). The star-crossed lovers on display in Song of Songs are filled with wonder—erotic wonder—for each other. Provocatively, Brown suggests in loving each other “through their bodies . . . the world itself becomes enchanted” for them (p. 94). This seems right to me. When we really look at another—putting down our smartphones and to-do lists—we are transported out of ourselves and thus able to see more clearly. We see the sacredness of the other—and we become aware too of the Divine Other. In this way, human love for another, once aroused, can lead, if faithfully followed, to the Divine Lover of our souls. Brown’s tour through some of the wonder-inspiring texts of the Old Testament concludes, in chapter 10, with a look at Isaiah 43:15-21 and Amos 5:21-24. The prophets were “inspired poets” (p. 107) that deliver to God’s people “timelytruths” (p. 107). Both prophets, through the imaginative metaphor of water (in Isaiah the water replenishes the land, in Amos we learn the “sound” of justice; it is like a “perennial torrent” (Amos 5:24)), help us understand God’s desire for renewal and justice. God cares about his people and he cares about the world he made and sustains. This passionate care provocatively suggests that God himself will do something to “right” a fallen world.

This prophetic wonder births into “incarnational wonder” in chapter 11, as we explore the prologue to the Gospel of John. John 1 is a “literary echo chamber” and a “mashup” (p. 113) of themes found in Genesis 1 (“in the beginning, God created”) and Proverbs 8 (and the personification of Wisdom). In John 1:1 we learn that the logos (word) was there “at the beginning.” Even more astounding, this logos who created the world “became flesh” and “lived among us” (John 1:14). The incarnation is not God’s “incarceration on earth,” (p. 117). Rather, John uses another word to describe “God’s full-bodied embrace of creaturely existence:” (p. 117). The depth of God’s incarnation in Christ reflects the depth of God’s love for the world.

This depth of love breaks forth into melody in the hymn of “cosmic wonder” found in Colossians 1:15-20 (chapter 12). “As John 1 attests to the marvelous depth of Christ’s incarnation,” Brown writes, “so Colossians 1 proclaims the incalculable scope of Christ’s salvific reach” (p. 119). God will reconcile “all things” in Christ (Col. 1:20). The central act of reconciliation, the resurrection of Jesus, begins in terror, however, as the abrupt ending to the gospel of Mark helps us see (chapter 13). The “terror” of the resurrection is “beyond mental grasping because it heralds the unimaginable: an empty tomb emptied of death” (p. 128). This “deafening silence” at the end of Mark causes us to ponder the magnitude of the resurrection and the wonder of Christ’s victory over death. What begins in terror of the resurrection leads to further wonder, as we consider the women’s discovery of the empty tomb in John 20 (chapter 14). Mary’s misidentification of Jesus as a gardener, according to Brown, is not a mistake. For John, it brings to the reader’s attention the first garden and invites us to wonder afresh the miracle of new life in “this second garden” (p. 135). In chapter 15, Brown continues to explore the post-resurrection appearances of Jesus, this time by focusing on the appearance of Jesus to two travelers on the road to Emmaus in Luke 24. “Luke presents to us the mysterious case of the vanishing Christ” (p. 139). As Jesus walks with these disciples, their hearts burn and eventually their eyes are opened. And as their eyes open, Jesus vanishes from their sight. In this story, we see the wonderful convergence of mystery and knowledge, insight and no sight, God and man and the God-man. Finally, in the book of Revelation, we find one of the greatest mysteries: God is not making new things, rather he is making all things new (chapter 16). God brings restoration and renewal to the heavens and the earth, and then he will take up residence in the new Jerusalem. The end of creation is not annihilation, but consummation, healing, flourishing, and the unmediated presence of God.

Brown is a “docent of the text of wonder” (p. 159) helping us to see the wonder of the grand story of God from Genesis to Revelation. Wonder of God’s word and world sets us on a journey that ends with joy-filled communion with God and God’s people. In seeing and delighting in God’s word and world, we see all as gift. Brown is correct in linking, then, in his concluding chapter 17, the use and abuse of things and people and the loss of wonder. “If we lose our sense of wonder, we lose the world and ourselves. But if we lose ourselves in wonder, then there’s always hope” (p. 157). When we hear the call of wonder we begin a journey of hope that ends in wholeness, joy, and delight. May we all become “docents in the house of wonder” (p. 159) as learn to see, and invite others to see with us, the mysteries of God in the divine drama and the cosmic stage. –Reviewed by Paul M. Gould