0
The Character Gap, by Christian Miller
14 November 2019
Next 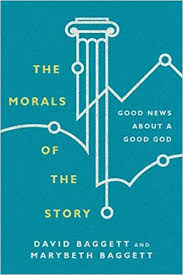 There has been a revival of interest in the moral argument for God over the past 50 years. With ever-increasing sophistication, Christian philosophers and theologians are showing the intimate connection between the moral order and the sacred order. The result, as David and Marybeth Baggett argue in their book The Morals of the Story, is that “Moral Apologetics” is making a comeback in the academy, the church, and on the streets. With the rampant confusion on all things moral, the timing could not be better. The culture’s “collective moral imagination” (p. 35) is impoverished. As a result, much of the moral discourse that takes place in our culture is driven by emotion and outrage. Yet many are aware of certain recalcitrant moral facts about values, obligations, and more that cry out for an explanation. Baggett & Baggett (hereafter, B&B) have written an accessible and witty book that brings the reader up-to-date on the state of play of the moral argument. It is not merely academic (as if anything ever is), the purpose of The Morals of the Story is to equip believers to engage in moral apologetics.

The book is creatively organized as a three-act play. Act One sets the stage by identifying the moral facts in need of explanation (values, obligations, freedom, knowledge, and transformation) and then providing the reader with a quick and impressive tour of historical and contemporary defenders of the moral argument. I’ve read plenty of apologetic books, but I must say, rarely do I find opportunities for laughter. This book is an exception. B&B are funny! I was hooked—and sold—by the first line: “This book isn’t for everyone. Dead people, for example. But it’s for everyone else. Except zombies” (p. 1).

After a fascinating “intermission” to address the so-called Euthyphro objection to theistic ethics (Is something moral because God commands it, or does God command something because it is moral? Answer: neither, God is essentially good and his commands flow out of his nature; morality is dependent on God in one way or another. Thus, there is no incoherency worry at the heart of theistic ethics, or at least none related to Euthyphro), B&B introduce the main “characters” that figure centrally into their cumulative moral argument. The main players turn out to be various aspects of the moral order that cry out for an explanation: moral goodness (and evil), moral obligations, moral knowledge, the genuine possibility of moral transformation, and the rationality of the moral life. Each of these “characters” gets a chapter where the topic is introduced and explored.

All of this sets the stage for Act Three. B&B offer a cumulative, abductive, teleological moral argument for God. The idea is that moral facts, knowledge, transformation, and rationality are best explained on Christian theism: “The divine loom weaves together the warp of moral facts with the weft of moral knowledge and, by turns, the taut threads of moral faith” (p. 231). While they have benefited (as many of us have) from the deductive approach to the moral argument championed by William Lane Craig, B&B prefer the abductive approach as dialogically more effective because it seeks common ground first and then, once common ground has been established, the best explanation for it. In seeking the best explanation for the moral order, we also find a story that understands us, including our failures, guilt, shame, and need for forgiveness and transformation. In that story—the gospel story—we find a loving God who creates us to flourish, desiresour flourishing, and works on our behalf to bring about our flourishing. “The Morals of the story are nothing less than the message of hope and offer of salvation from the God of resplendent grace and goodness and glory” (p. 240). This is good news indeed. I heartily recommend this book to anyone who wants to understand the current state of play with respect to the moral argument for God, the nature of morality, and the goodness and beauty of the true story of the world. Written by a professional philosopher and English professor, it is accessible to just about anyone. Except zombies.–Review by Paul M. Gould