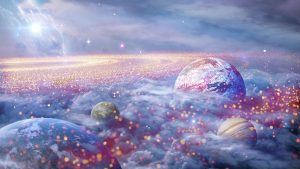 In the last episode we explored the central metaphor of “the silent planet” – the idea that the earth is fallen and cut off from the heavens and now under the domain of the evil one. Ransom’s journey to Malacandra put him in contact with three unfallen races, and also gave him the opportunity to gain a greater appreciation or understanding of man’s depravity. In this episode we’ll explore the idea of fallen and unfallen alien creatures and what that might been for Christianity.

In chapter 16 of Out of the Silent Planet, we encounter a scene where we find unfallen creatures struggling to understand the bent-ness of humans. We also find Lewis offering a partial explanation with the idea that each human wants to be a “little Oyarsa.” We are confronted with an interesting theological possibility: could there by unfallen intelligent creatures in the universe?

In an excellent essay by Chad McIntosh and Tyler McNabb called “Houston, Do We have a problem? Extraterrestrial Intelligent Life and Christian Belief,” they explore the question of ETI and whether their existence might conflict with any Christian doctrine. It has been argued that the doctrines of the fall, incarnation, and atonement rule out unfallen ETI. However, as McIntosh and McNabb argue, the assumptions employed in this kind of theological reasoning can be challenged.

Let’s consider three assumptions often made and the validity of each assumption by those who argue that there would be a conflict between ETI and Christianity.