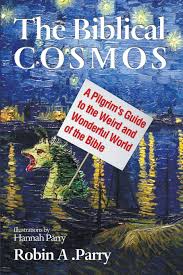 Here are two claims that seem to be in tension. First, the Bible’s understanding of the universe is based on an ancient science that cannot be held by honest thinkers today as correct. Second, the Bible is an inspired, authoritative word of God. Robin Parry’s book The Biblical Cosmos shows us that this apparent tension is not an actual tension. When we understand the Bible’s claims in their ancient context we learn truths about God, ourselves, and the world he has made. The Bible is not outdated; it is just as relevant today as it was for its original audience. But the Bible should not be domesticated, nor treated as a modern text. Parry argues that an understanding of the historical context of the Bible will help us better understand its teaching and apply them to our lives in this day and age.

The ancient view of the cosmos is very different from ours. For starters, the biblical cosmos is bursting with life whereas contemporary conceptions of the universe draw a sharp line between the inanimate and the animate. In the Bible, we learn that the heavens declare the glory of God (Ps 19:1), trees in the field sing for joy (Ps 96:12), and, according to Jesus, if we don’t worship God, then the rocks will cry out instead (Luke 19:40). All creation cries out to God in this sense: everything that God has made points to God. Or to put it another way, God is present and active in all creation. This is a very different picture of the world that the mechanical clock conception gifted to us by the Enlightenment. The cosmos is not only a living cosmos, it is God’s temple. Like all temples there is structure—in ascending order, there is sheol, the Earth, the starry heavens, and then heaven itself—and a purpose (to re-present and communicate God’s goodness). Within each realm, God is present; God is active. God is “Lord of every sphere of creation” (p. 13).

Parry divides The Biblical Cosmos into four parts. In the first two parts, we are taken on a tour of the two main parts to the cosmos—the heavens and the Earth. He begins, in part one, with the biblical Earth. We learn the structure of the biblical Earth (it’s flat), the location of the Earth within the cosmos (the center), the location of Jerusalem within the Earth (the center), as well as the importance of sea (and water), sea creatures, land, mountains, wilderness and deserts, and sheol (the realm under the Earth).

In part two, we are taken on a tour of the biblical heavens. The Bible has a lot—much more than I was aware—to say about the heavens. We learn of the biblical teaching about the sky, the weather, and celestial bodies (sun, moon, stars). The ancients worshipped celestial bodies as divine. The fact that this kind of worship is explicitly forbidden in Scripture (e.g., Deut 4:19) suggests that it was a temptation for the Israelites as well. Still, according to Parry, there are reasons for thinking that the biblical authors did view the sun, moon, and stars, while clearly creature, as closely related to certain heavenly creatures/angelic beings known as members of the divine council (p. 100). Either way, the biblical world is far more enchanted than our world. There is more to reality than the material—and even the material is never just physical. God’s heaven, according to the bible is “up” (p. 120)—Jesus ascended into the sky as he went to be with God in heaven (not the heavens, but heaven). Moreover, heaven is God’s primary dwelling place in the cosmos (p. 122), inhabited by other heavenly creatures (p. 125), usually inaccessible to terrestrial creatures (p. 133), and part of creation (p. 133). God is the creator of heaven and earth—the invisible and the visible. One day, God will make all things new. He will also “unite” heaven and earth (p. 134).

In part four, Parry asks, can we inhabit the biblical cosmos today? In other words, can the biblical conception of the cosmos become our conception of the cosmos? The answer is a qualified yes. It is not possible, according to Parry, to maintain what he calls fundamentalism, the idea that we must read contemporary science off the pages of Scripture (p. 165). No intellectually honest modern person should think the earth is flat or the center of the universe. Divine accommodationism is a “step in the right direction” (p. 166). Parry rightly notes that “[m]ost biblical scholars and theologians today recognize the gap between biblical and modern cosmologies” (p. 166). Many recognize that God accommodated ancient people by revealing himself according to their understanding of the world. The is little to no real debate over the fact of divine accommodation in Scripture. Rather the debate today, especially in science and religion dialogue, is over the extent of divine accommodation. Concordists think that we can bring some, perhaps much, of the biblical teachings on the physical universe into concord with contemporary (true) science. Nonconcordists think the Bible presents an ancient cosmology through and through and that we ought not to read the Bible as a science text. Rather, according to nonconcordism, God is communicating truths about himself and the world he has made without laying out, for example, a fundamental physics or a first-pass list of the elements for a periodic table. Parry argues for a third, and more promising way forward: Christian Platonism. “It seems to me that God is communicating his truth not merely in spite of the ‘wrong science’ but in and through it” (p. 167). On this approach, we should not “return to a pre-scientific view of the world but rather a post-critical retrieval—a willingness to let God speak anew precisely through the strangeness of the ancient text” (p. 167).

The idea that we inhabit a cosmic temple helps us understand the sacramental nature of the world. The universe is distinct from yet tightly bound with God. Moreover, the universe participates in God (this is the Christian Platonist part). The universe functions semiotically, as a sign, pointing to spiritual realities beyond this world. Thus, we can and ought to affirm the clear and consistent teaching of Scripture on the goodness, and materiality, of the created world. It is still possible to think of the heavens as “up” even though it is a non-material, invisible realm: “perhaps we might speak of heaven as the invisible depths of creation containing the divine presence at the center of things” (p. 181). And while the earth isn’t the literal center of the universe, it is the center of the divine purpose in creating, for on Earth we find beings created in the divine image, who receive God’s good things and in turn, as priests and priestesses, re-gift them back to God in joy and thanksgiving. The Biblical cosmos, as the world-stage of the divine drama, is where we creatures come to understand that “All things come from God, depend on God for their being at each and every moment, and exist for God” (p. 209). I recommend Parry’s The Biblical Cosmos to anyone who needs to “clean off their glasses” (as Tolkien puts it in his “On Fairy Stories”) so that we might see afresh and delight again in God’s good world.