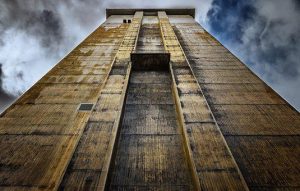 What is Lewis doing with this allusion to the tower of Babel?

First, I’d just like to note Lewis’s fascination with language. From the very first book, one of the main themes has been on the nature of language. Ransom is a philologist and Lewis continually plays on words—as we see in his many references to Jove, Hell, and the devil, all made in the context of conversations—but they are meant to be taken quite literally most of the time. Language is a major theme again in the third book, and we’ll consider the theological nature of it in a minute.

Second, I think it is important to remember what was going on in chapter 11 of Genesis. When the humans set out to construct a tower to the gods—their motive was to be like God, to exalt themselves—and in that way they were seeking to remake humanity in their own image. In the same way, the leaders at Belbury were seeking to remake humanity—in fact, to eradicate humanity by producing—in league with the macrobes (or demons) sanitized, spiritual versions of humans—literally men and women without chests or bodies. Like those at babel, the leaders at Belbury were playing God.

Toward a Theology of Language

In Junius Johnson’s The Father of Lights, Johnson writes a chapter on “Word and Concept” where he considers the origin of language. Which comes first: language users or language? Or more precisely: concept users or concepts? According to the linguistic relativist, how we get our concepts is completely arbitrary: they are just what seemed right or worked for some past society (and then have been gifted down to us). There is no answer to whether or not our concepts (and language) represent reality on this view, although it is possible to speak of a concept (and language) representing a certain culture. According to the linguistic realist, concepts come from the things itself (I admit at this point this sounds vague and odd, hang in there). As such our concepts can represent the world and we do a pretty good job most of the time. I think that the correct view here is linguistic realism.

Biblical Passages Relevant to a Theology of language?

First, there is the divine speech act of creating. In Genesis, God speaks the physical universe into existence. This seems to be a clear instance of a signifier (God), causing the signified (the thing). But the thing (the res) does not yet exist in the divine speech act. But this does not mean there is no signified. Something specific must be signified if the right thing (res) is to come into being. What is the thing signified then? The answer is a divine idea. God models the things of this world on his divine ideas. In this picture, the concept of a tree pre-exists trees. Thus, concepts are logically prior to language, which is suggestive of some kind of linguistic realist account.

Second, Adam’s naming of the animals. In Genesis 2:19-20, notice that God brought the animals to Adam. This suggests that Adam’s naming of the animals, according to Johnson, is rooted in a kind of recognition of their nature or essence. Thus, Adam names the animals freely and according to his good pleasure, a pleasure in accordance with “the truth of [their] being.” Again we see that concepts precede words, and thus the creation of human language is based, as the realist claims, on the nature of the things signified.

Third, the Tower of Babel and the shattering of language. In Genesis 11:1-9, we read of the construction of a great tower meant to unify all cultures and elevate the glory of human achievement. In response to this idolatry, God destroys the tower, scatters the people, and confuses their language. Part of the reason for God’s action, according to Johnson, is because the Tower of Babel represented “a transgression of the divine purpose for language.” These theological observations about the shattering of language at Babel are suggestive: perhaps the postmodern confusion with respect to language has more to do with exhaustion and a failure to continue on the “journey of language to reality” than with the strength of any arguments for the truth of linguistic relativism. In other words, perhaps the postmodern mindset is the result of a weak theology of language rather than a strong philosophical case.

Fourth, Pentecost and the restoration of language. In Acts 2:1-12 we read of the Holy Spirit descending on the apostles, enabling them to speak in other languages. According to Johnson, this event, among other things, “represents the overcoming of the curse of Babel in that the multitude of languages is no longer a barrier to communication.” But not just language; Pentecost is a reminder that all things point to and illuminate the divine. Cultures are cursed because of the Fall and Babel, but not culture; the cultural mandate (Gen. 1:28) remains operative. Culture is redeemable because God celebrates diversity, including diversity in language.

These four theological considerations, as discussed by Johnson, are only a start. But they offer a good start towards a theology of language. They also offer us a way to understand that mysterious mind-language-world nexus: God creates the world out of nothing according to his divine ideas. The world, then, is a sacrament—a sign—that images and points to God. Language too is a sign. Our language names things, and our best language names things as they truly are. This helps us understand baptism too as a kind of naming event, where we are baptized “into the name of” the Father, Son, and Holy Spirit (Matthew 28:19-20).