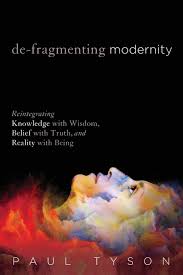 Modernity did not usher in the long-promised utopia. There are many things wrong with culture and many instances of people being wronged in culture. There are problems to be solved: the problem of meaning, the problem of value, the problem of rights and duty, and so on. But these problems can’t be solved because of a deeper systemic—or better, philosophical—problem with modernity. The root problem of modern society, according to Paul Tyson in his book De-Fragmenting Modernity, is that “Modern Western knowledge is blind to truths of being and belief” (p. 5). To us moderns, only objective facts, shorn of value judgments, are knowable. When it comes to “being” or questions of ultimate reality, modernity delivers scientifically discoverable atomic truths understood within the immanent frame (Charles Taylor’s term) of a causally closed physical universe, a universe devoid of deep meaning, purpose, or value. Tyson argues for repentance—the abandoning of this shallow modern life-world picture and a turning back to a more ancient and Platonic way of conceiving things. Fundamentally, this change involves the adoption of the ontological priority of being and an openness to transcendence.

Renewal begins by recovering the notion of “being” (chapter 2). After a brief historical discussion about how the metaphysical notion of being was lost (beginning with the usual culprit—Duns Scotus), Tyson argues that we need to recapture a sense of wonder regarding the “given-ness of being” (p. 12). Tyson’s project is one of retrieval. If we are going to find answers to our problems, we must connect being with knowing and believing. We do this by adopting the (Thomistic) doctrine of the analogy of being, along with its tripartite ontology of being. First, there are finite creaturely substances—beings like us—that are “beings by participation” (p. 26).  Second, there is “being proper”—eternal forms, or better, ideas in the mind of God (i.e., exemplars) that ground the identity of us creaturely substances. Finally, there is Being itself, i.e., God. Strictly speaking, given the doctrine of analogy, God is “beyond being” (p. 26). Thus, on this Thomistic way of construing the doctrine of being, God doesn’t literally exist since existence pertains to the realm of change, rather God just is (and for Aquinas existence and essence are identical and are God). For those familiar with the intellectual territory, this way of thinking about being is at least familiar. For most of us, however, it sounds utterly foreign. I’ll report my views here too: I don’t think we need to adopt the analogy of being and the resultant tri-partite ontology to adopt a Christian Platonistic ontology. I think we can even follow Scotus in holding existence to be univocal (the horror!) and still get the result Tyson seeks if we also hold that there are different ways of being (for contemporary metaphysicians, this is discussed in the growing body of literature on ontological pluralism). So, for example, on my view (full disclosure, I’m a Christian Platonist too), God is the sole independent fundamental being and creaturely substances are dependent fundamental beings. Thus, God and creatures both exist (full stop) but in different ways. Moreover, creatures participate in the divine along some dimension of character (i.e., we resemble a divine idea). Bottom line, I think Tyson is on target that we need to recover a robust doctrine of “being” and I also agree that finite creatures participate in God in some way, but I don’t think the only way to make this work is to adopt the Thomistic version of the doctrine of anaolgia entis. Setting my worry aside, Tyson’s concluding point in chapter two is on target: “reclaiming the tripartite understanding of ontological reality [my read: recovering a robust doctrine of divine aseity along with a sacramental view of the universe] . . . is a necessary feature of a coherent Western ontology . . . . [it is also] necessary if we are to have a credible understanding of the intelligibility of reality itself, and hence, of our own thoughts” (p. 38).

In chapter three, Tyson argues that we’ve forgotten the primacy of being because of how we’ve come to know and believe things. Without the participatory ontology of Christian Platonism, modernity has reduced knowledge into a kind of “instrumental constructivism” (p. 47). However, given the realism of a participatory ontology, “there is an ‘objective’ meaning, value, and purpose gifted to all beings by the Creator, whether I ‘subjectively’ appreciate it or not” (p. 48). On the older way of conceiving things, being and knowledge are actions, “All creatures are in communion with all other creatures by virtue of their common grounding in the Creator” (p. 48-49).

Moreover, the forgetfulness of being is an inherently bad thing (chapter four). The loss of an ontology of being is not a value-neutral thing nor is the myth of progress, along with its rejection of ontology, good. Rather, as truth dies, power and oppression reign. As Tyson summarizes, “The forgetfulness of being is an inherently bad development in the history of Western culture for it frees staggering instrumental power from moral, meaningful, and theological restraint. This development equips the power elites of the modern world with a hubristic indifference to the true realities of existence and actively legitimates oppressive and destructive power as somehow simply necessary and ‘realistic’” (p. 91).

In the final two chapters (five and six), Tyson calls for renewal and return as the only workable answer to man’s fundamental problems. “The time has come to seriously consider returning to an integral understanding of meaningful truth, to recover ontology” (p. 92). The universe is fundamentally meaningful, and hence knowable, because God, being itself, is the ground of reality. Mind is prior to matter. Reason prior to Nature. Without a transcendent source, there is no meaning in the universe, nor the possibility of genuine knowledge. Even the grand narrative of modernity—the idea that development is progress (p. 98)—can’t be given a coherent foundation without something beyond the material world. Knowledge requires meaning and meaning requires a Mind beyond this world; we can only know things if we take existence—and ontology—seriously. Tyson is not arguing against facts. He is seeking to make them visible again, and “meaningful and richly true” (p. 102). “What I am seeking to do here is revive the classical priority of ontology over science, logic, and power, so that science, logic, and power might be substantively meaningful in terms that are genuinely hermeneutically rich and hence existentially recognizable as meaningful realities within the world as our actual existence experiences it” (p. 102). Paraphrasing title of his previous (and excellent book), Tyson calls the reader to return to reality as it is (actual title, Returning to Reality). To return, we must be like Jesus’s little children, full of child-like wonder at the gift and given-ness of being. This posture, in turn, will teach us to delight in this world as participants in the drama of being, as members of an “ontopia” (p. 112) now understood as the place where we actually live and move and have our being.

I’m a fan of Tyson’s work. I think he is an important voice among those of us (I include myself in this group) engaged in the renewal project of reenchantment. By locating our lives ontologically in the Great Chain of Being (my words, not Tyson’s), we find our place and purpose and the ground of our existence, identity, and value. We also find the possibility of love, knowledge, joy, faith, and genuine happiness.